The Limina series was made during my residency in the hot shop at the Museum of Glass in Tacoma, WA.  Limina is Latin for “threshold” and indeed these works were that for me as I entered new territory in glass media for the first time. I was so fortunate to have a great team of experts led by Ben Cobb, head gaffer, assisting in the creation of twenty handblown vessels.  These works took their aesthetic cues from the Patra Passage bowls and guided my decisions as I directed and worked with this knowledgeable hot shop team. For each of these blown glass vessels, I made a corresponding painting that acts as its base, similar to the Patra bowls but much larger in scale. I found a surprising symbiosis between my familiar acquaintance with paint and these new works in glass. 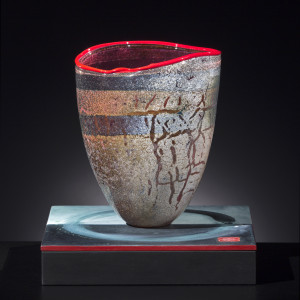 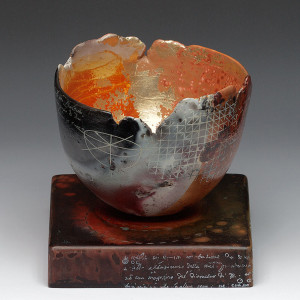 The word incunabula refers to the early beginnings of printed materials and books, some having a mysterious origin or intent. In even earlier ancient manuscripts, the inked writing on valuable vellum was sometimes scraped off to record new written records. In time however, those first accounts could reappear beneath the later script creating a palimpsest of layered text. This was the idea I had in mind for the Incunablua Series. These page-sized fused glass pieces were made with the knowledgable assistance of Steve Klein in 2019. Each work is made with a compilation of glass planes; one piece of glass with its composed imagery fired atop the one below, building layer upon layer of dimensional transparencies. They are displayed on their stands as if in codex-form suggesting some curious scientific manuscript from a mysterious past. 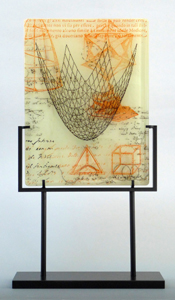