The Patra Passage was an interactive art-based project that experimented with a cycle of giving and receiving. The passage centers on the giving of 108 hand-built ceramic vessels to participants who own them and then re-gift them to others of their choosing. The project took several years of production and several more for the participatory aspects. The giftism cycle began in 2013 and continued for one year with each bowl presented and received at least three times. It created a community of 501 participants from five continents, eleven countries and forty states. At the end of their circulation, the Patra bowls were returned and exhibited at the Museum of Glass in Tacoma, Washington in 2015. After exhibition, to continue the giving cycle, the vessels were sold and $50,000 in proceeds were given to Save the Children and the Museum of Glass. To learn more, continue reading below and view the Patra Passage documentary film by Derek Klein.

***Another recent interactive giving-receiving project involving over 300 artists, poets and contributors, titled Gatherings, can be viewed on www.gatheringsproject.com and on this site’s News menu

film by Derek Klein on Vimeo.

The word patra refers to the name of alms bowls that monks carry in various cultures to receive their portion for the day, an act that creates an understanding of interdependence with community and openness to the cycle of receiving and giving. The word’s origin in Sanskrit translates as “the vessel that never goes empty”. Whatever is received in the bowl is enough for the day, a reminder of the offerings of the present moment.

The idea first appeared when I was visiting monasteries in Tibet where vessels lined the altar filled with water, millet, a flower, a shell, an oil candle, or something engaging to the senses; sometimes a vessel had no visible contents. Do these vessels contain what is given, or what is to be received? The inquiry lingered even when the physical object was no longer present. The impression suggests that giving and receiving can be a simultaneous and fluid act, the passage of a gift bestowed and accepted.

Lewis Hyde’s book, The Gift: Creativity and the Artist in the Modern World, and Phil Cousineau’s book, The Art of the Pilgrimage: The Seeker’s Guide to Making Travel Sacred,  develop concepts that were central to this project. The authors write eloquently about giving as it appears in cultural history, economies, mythology, artistic practice, and how paying attention enlarges our perception. These books posit that the circulation of gifts and meaningful exchange create unity out of expressions of good will, expand our boundaries, and connect us.

Hyde suggests that when a gift passes from a giver in a circle of offerings, not as a form of reciprocal exchange between two people, or as material commerce, the giving goes beyond the control of the personal ego. He suggests that a gift’s increase in value begins after it has passed through someone. The permeability of self and its expansion is the essence of the gift; the object itself is only its vehicle, its vessel. The giver becomes part of the circle’s larger continuum that Hyde describes as “transcendent commerce, the economy of re-creation, conversion, or renaissance.” In the Patra Passage giving and receiving are fluid continuous acts, a gift bestowed, accepted, and passed along.

“When we start to ask ourselves what we can give away, we begin to see our possessions differently– they take on new potential as blessings for others, instead of being cold hard stuff. Who was it who said you never really own something until you give it away?”
– Lewis Hyde

Cousineau dives into the mythology of giving and creating connections. He describes how every journey is an act of discovery and how it can be a soulful and transformative experience.

To be touched, we must in turn, touch….Objects that must be touched are an integral part of the pilgrimage.  – Phil Cousineau

Images and objects are both what we see and how we see them. Objects that engage ideas can span the divide between the outer world of concrete forms and inexpressible inner realities, matter and spirit, emptiness and fullness, self and other. The Patra vessels engage this dialectic. Each experience is uniquely endowed by the orientation of the beholder. In the Patra Passage whatever perceptions are brought to the bowl are acceptable.

Gratitude can be a rare commodity if society is overly consumptive, busy, and self-absorbed. A careful balance needs to be maintained between commerce and altruism. Acts of generosity take us out of ourselves and are one of the greatest means for generating compassionate communities and reducing wasteful excessiveness. Giving something away for free makes its value indeterminate; the recipient decides its value. In this way, the “art” happens outside of monetary value, trade or profit, and inside the context of firsthand experience and meaningful encounter. The gift is not just the object itself.

The Patra Passage considers material, social, cultural, and perhaps spiritual concerns. The project poses these questions: What is the proper balance between art and acquisition, generosity and consumerism? What role does art play a role in highlighting unity and developing community? Can generosity be a subject of critical artistic examination? What is the value or potential of art that is no longer physically present? Can we use the absence of an object to evoke a firsthand experience of a lived moment in time, or as a means to imagine what lies beyond it? What role does an undirected trajectory play in the outcome of an artwork?

Some of the 108 Patra vessels on their paintings 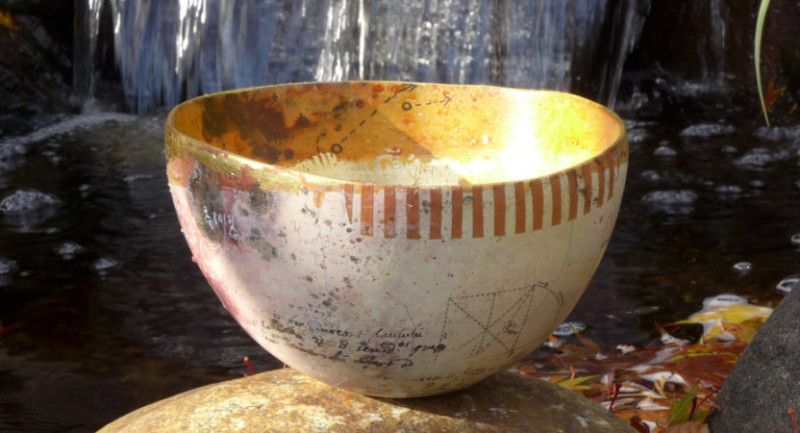 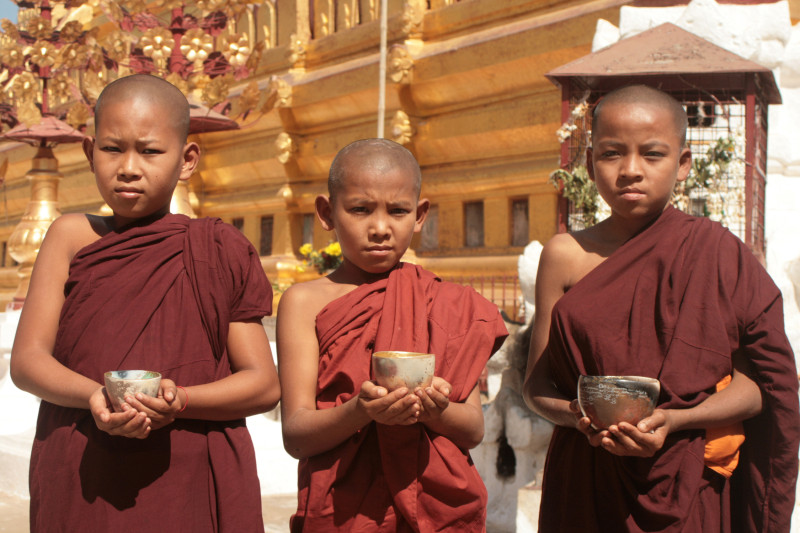 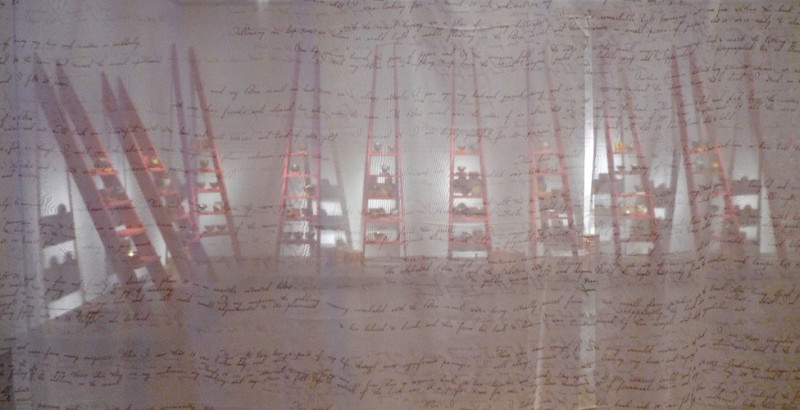 View of installation at the Museum of Glass exhibition “Patra Passage Full Circle” as seen through scrim printed with participant comments. 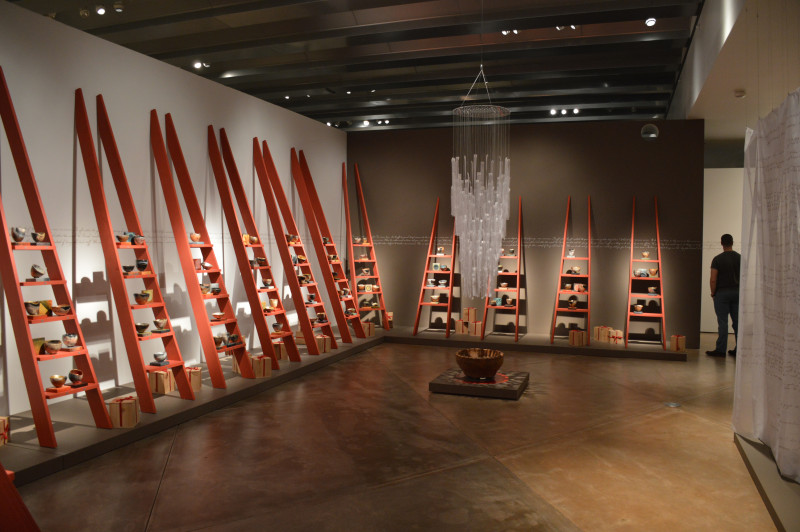 Installation detail of Patra vessels at the Museum of Glass. 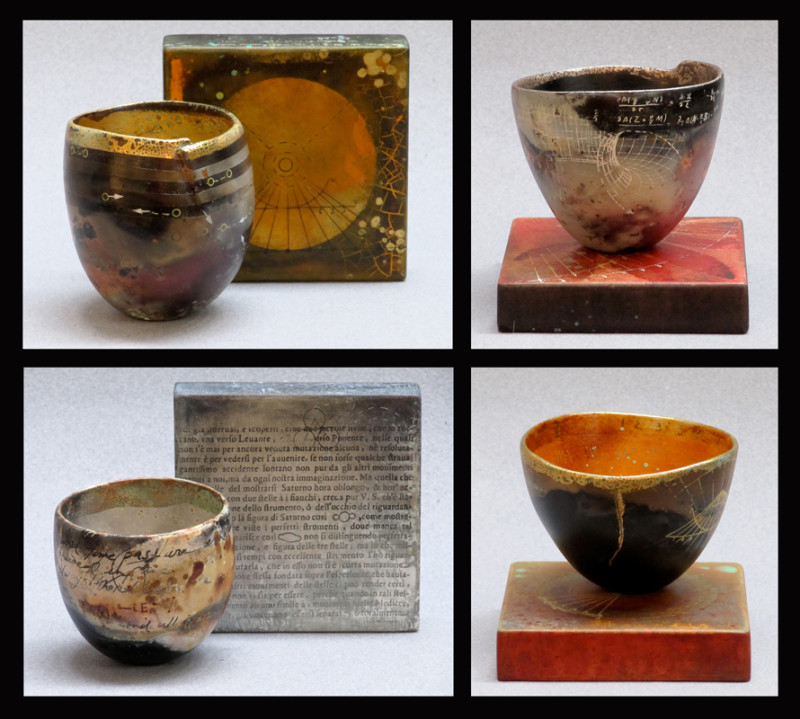 Four Patra vessels and their bases